Skip to content
Posted on March 3, 2017 by ryanwaldis Posted in Uncategorized

Over the next 30 days (March 1st through March 30th), I’ll be previewing each MLB team in reverse order of the 2016 league standings. The series will conclude on March 31st, when I’ll be releasing my predictions for the 2017 season. With that said, let’s jump into today’s team preview, featuring the Cincinnati Reds.

Sidenote: Click here to be taken to the “hub”, where you can access any of the thirty team previews as they become available. The hub will be updated daily. 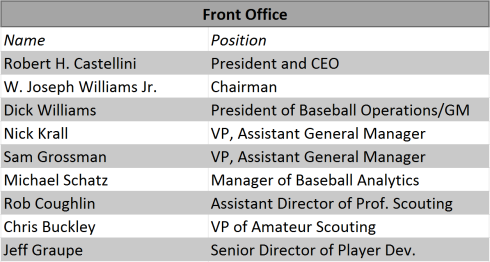 The main change in the Reds front office involved title changes for both Dick Williams and Walt Jocketty. Jocketty, 66, intended to step away from the full-time duties of being a front office member after the 2016 season. One of the main reasons was his family. Jocketty said, “There’s a lot of things we want to see and do and have time for. There’s a lot I missed with my kids over the years.” Jocketty will still remain with the team as an executive adviser, but after 40-plus seasons in baseball, he’ll finally be able to make up for lost time.

While Williams technically had the General Manager title last year, he officially succeeded Jocketty after the 2016 season ended, when he was instituted as the President of Baseball Operations, General Manager.

One of the more interesting front office changes that the Reds made was the hiring of Mark Heil, who is the organization’s first-ever player development analyst. Essentially, he’ll be in charge of keeping track of players within the organization and seeing how they develop, making sure that they are reaching their developmental goals. Presumably, if some of the players are not meeting their goals, it would be at least partially up to Heil to figure out what the issues are.

After several shakeups for Bryan Price’s staff occurred during the 2015 off-season, nothing changed this past off-season. They fired first-year pitching coach Mark Riggins in early July, eventually replacing him with Mack Jenkins. 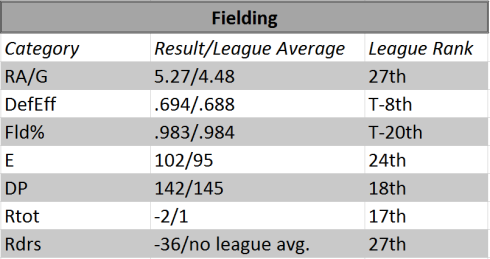 It shouldn’t be surprising that a 68-94 team ranked as low as the Reds did in most categories. The Cincinnati pitching staff was the primary culprit for the team’s lack of success, letting up the seventh-most runs in franchise history. That’s not to discount the struggles of the offense, as they finished 26th in wRC+, finishing with a mark of 89. They finished The defense was probably the best part of the team, as they were one of 16 teams to finish the season with a positive UZR.

As he’s done for so many years, Joey Votto carried the Cincinnati offense in 2016 despite struggling for the first three months of the season. Part of it might be because he plays in Cincinnati, but it’s so easy to forget how good Votto actually is. Consider this: among players with at least 250 PA’s last season, the Reds first baseman finished third in wRC+ (posting a 158 mark), behind just Mike Trout and David Ortiz. He also finished third in wOBA (behind the same two players) and fifth in BB%. At 33, some players might begin to decline a bit, but there’s no reason to think that Votto-matic will anytime soon.

That .291 batting average might look enticing, but a deeper look at Brandon Phillips shows that he’s just not as useful as he once was. The power that the second baseman once exhibited–at least 17 HR’s in eight consecutive seasons–has greatly diminished. Unlike Votto, Phillips doesn’t exactly showcase great plate discipline as evidenced by his 3.1 BB%, which was good enough for second-to-last in the league among qualified batters. Even worse? He posted a negative UZR (in a full-time season) for just the second time in his career. At 36, Phillips’ time in the bigs seems to be coming to an end sooner rather than later.

Moving to a younger player, Billy Hamilton performed very well last year. Excluding his cup of coffee in 2013, the speedster posted the highest BB%, wOBA, and SB marks of his still young career in 2016. His 12.8 BsR was the highest mark in the league among those with at least 400 PA, and if all of that isn’t enough, he finished in the top 10 in UZR/150, indicating that he’s one of the better fielders in the game today. They say speed kills, and Hamilton is a perfect example of that.

There was a point in late June when Zack Cozart was slashing .284/.325/.513 with 11 homers. In the end, I guess Zack Cozart wasn’t meant to be one of the better offensive SS’s in the game, as he struggled down the stretch, finishing the season with just 16 dingers and a triple-slash of .252/.308/.425. Even though the offense wasn’t there for half of the season, the 31-year-old posted a UZR/150 of 14.6, good for 11th in the league among qualified fielders. In a contract year, it’ll be interesting to see how Cozart performs, especially coming off of his second right knee injury in two years.

Adam Duvall had never earned more than 80 PA’s in a season heading into 2016. So, naturally, the Reds gifted him 600-plus, and the former Giant rewarded them by belting 33 four-baggers, tied for fifth-most in the NL. Duvall is no slouch in the field either; he posted an 11.4 FRAA in left last season. He’s not great on the base-paths and he strikes out at a high rate, but the All-Star proved that he can handle an everyday job.

Jay Bruce was on his way to his best season since 2013 before an August 1st trade to the Mets seemingly ruined everything, as he slashed .219/.294/.391 with the New York club. The slugger is in a walk year after the Mets picked up his $13MM team option, and while the power is still there, his struggles both on the bases and in the field as well as his overall inconsistency might scare some teams away.

While he couldn’t quite match or exceed the 106 wRC+ he posted in 2015, Eugenio Suarez improved several facets of his game in 2016. He hit more home runs, drew walks at a higher rate, and posted a positive UZR at third base after being a bit of a liability at short. At only 25 years of age, Suarez is still young enough to improve more. Having said that, Nick Senzel is breathing down Suarez’s neck, so it’s unknown how much longer Suarez will be starting at the hot corner for the Reds.

Tucker Barnhart became the Reds starting catcher almost by default as Devin Mesoraco had a second straight injury-plagued season. While he didn’t exactly impress, he didn’t disappoint, either. He held his own both at and behind the plate, and while you won’t see him on any “Top-10 Catchers in the Majors” lists, you could definitely do a lot worse at the position.

Speaking of Mesoraco, it’s defintely a shame what happened to him. The once-promising backstop who hit 25 round-trippers in 2014 and OPS’d close to .900 has only accumulated 106 PA’s the previous two seasons due to hip and shoulder injuries. Price still views him as an everyday catcher, though, so perhaps his career isn’t over quite yet.

Jose Peraza was easily the most intriguing player on Cincinnati’s bench in 2016. A top-100 prospect two consecutive seasons, Peraza was traded from Atlanta to the Dodgers to Cincinnati in the span of two seasons. He’ll never hit for much power, and you’d like to see him draw walks at a higher clip than he is right now, but it’s clear that he has the talent to man the keystone for the Reds for a while.

Having performed well at every level of the minors, some were still whether or not Scott Schebler‘s skill set would translate well in the majors. Suffice it to say, Schebler was solid in his first real taste of the Show. He’ll never be a stud corner outfielder, but there’s no reason to think that he can’t hold down the fort until someone like Jesse Winker is ready to take over.

I’ll start by saying this: the Reds rotation is intriguing. If everything goes according to plan, a five-man staff consisting of Robert Stephenson, Amir Garrett, Anthony DeSclafani, Cody Reed and Brandon Finnegan sounds nice. A bullpen with arms such as Raisel Iglesias and Michael Lorenzen does as well. Having said that, seemingly every pitcher at the major league level took a step back at some point or another in 2016. This isn’t meant to be a knock on the guy, but when Dan Straily is your most reliable starter, something is wrong.
Let’s get Alfredo Simon out of the way before moving on to the other guys. The good news: his FIP was two runs lower than his ERA. The bad news: his ERA was 9.36. Big Pasta was awful. That’s it.

It’s fun to remember when Finnegan was the 21-year-old straight out of college who was pitching in the postseason for the Royals in 2014. It’s not so fun to remember when Finnegan bombed in a four start stretch spanning late June to late July in 2016. This was a guy who had a 4.93 ERA due to that aforementioned stretch, when he let up 21 runs in 17.1 innings of work. Looking for answers, Finnegan came to the realization that the lack of good changeup was causing him to regress. He consulted Straily, who went through the same problem as Finnegan. The addition of a solid off-speed pitch was a godsend for Finnegan, who finished the season on a high note. If he can induce more groundballs and walk less batters, he could be a solid rotation piece for years to come.

It’s time for yet another installment of “Can Homer Bailey Stay Healthy This Season?” After two solid–albeit not spectacular–seasons, Bailey was gifted a six year, $105MM contract extension. Part of the reason was his durability: the right hander started at least 32 games and pitched over 200 innings in both 2012 and 2013. After signing that extension, Bailey just hasn’t been able to stay on the field. He started just 23 games in 2014 before taking the mound for a combined eight games in 2015 and 2016. When he’s healthy, the talent is there to be one of the more reliable arms in baseball, but as the years progress, that contract extension continues to look worse and worse.

DeSclafani was only able to start 20 games last season, but he impressed in those starts, pitching to a 3.28 ERA. His FIP and xFIP suggest that while he may never become an ace, he has the tools to become a reliable three in the Reds rotation for the next several years.

I was going to summarize the bullpen by simply saying “it sucked, nothing to see here, move along,” but that wouldn’t be fair to Iglesias and Lorenzen. While the former proved he’ll never have a role in a starting rotation, he showcased exceptional skills out of the ‘pen that left many (including myself) intrigued and wondering how he’ll progress this season. Don’t forget about the latter, either: after a transition to the bullpen, the first-round draft pick in 2013 performed very well, and secured a spot in the Cincy pen for at least the foreseeable future.

Now, on to the rest of the bullpen. It sucked, there’s nothing to see here, move along.

The Reds had a very quiet off-season, which is to be expected considering their in the midst of a rebuild. They didn’t lose anyone of note, and the big FA signings were Storen and Feldman. Storen should help out the bullpen immensely, though, at least in the short-term. If nothing else, maybe he fetches the Reds someone worthwhile at the deadline. Ditto for Feldman.

In a tough NL Central where the Reds would have to find a way to finish ahead of St. Louis or Pittsburgh (assuming Chicago wins the division again) to even have a shot at a Wild Card berth, it’s probably safe to say that the Reds won’t be in postseason contention this season. However, it’s reasonable to think that the Reds can be a better team than they were last season with a better record to show for it. Here’s how: